The project was for building a long range hybrid wireless network in the villages near Manaslu Himalaya region of Nepal using Wi-Fi (2.4 GHz and 5.8 GHz) and TV White Space (472 MHz to 698 MHz) spectrums to bring broadband Internet for the villagers. Later it was also decided to use VHF (192.5 MHz to 202.5 MHz) band because the equipment at this band also became available. The reason for not using only the Wi-Fi band was because there are several limitations with Wi-Fi network such as the need of clear LOS, the obstruction by the forest and cloudy weather etc. The reason why ENRD proposed to build network using the combination of Wi-Fi, VHF and TVWS technology was because it was assumed that such hybrid network would perform better and would make the network more reliable than building the wireless network only by using Wi-Fi bands. Thus the plan was to do comparative study of Wi-Fi, VHF and TVWS regarding coverage, throughput, performance etc. The network is providing internet services for e-medicine in the community clinics and e-education in community schools and for communication in the villages by creating hotspots. The proposed time line for the completion of the project was the end of February, 2016. However, it took much longer because of unforeseen factors. First the epicentre of the proposed sites for testing was very close to the epicentre of April 25, 2015 earthquake that hit Nepal and most of the villages were completely destroyed. The schools and the settlements are still under construction in most of the villages. Second, the bureaucracy of the government to get permission to use VHF and TVWS frequencies and import the equipment made it very difficult to implement the project on time. The project was completed in April 2017. 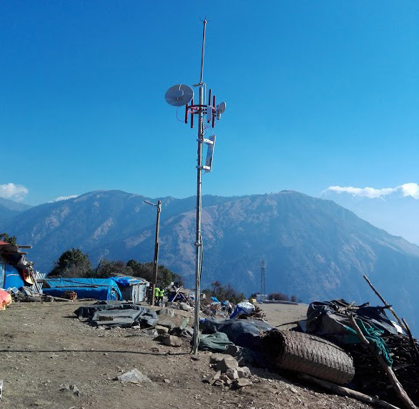