When the Internet Protocol version 4 (IPv4) was defined in the late 1970s, 32-bit addresses were seen as sufficient to cope with the future growth in terms of connected devices. However, with the rapid growth of the Internet in the 1980s it quickly became obvious that the Internet would run out of addresses relatively quickly. In the 1990s Classless Interdomain Routing (CIDR) and Network Address Translation (NAT) were introduced. CIDR allows a more fine-grained allocation of addresses than the original class-based system, and NAT allows hosts with private addresses, that can be reused in different networks, to communicate with the public Internet. CIDR and NAT successfully slowed the consumption of IPv4 addresses.

Meanwhile IP version 6 (IPv6) was developed with 128-bit addresses, making the address space so large that it is very unlikely to be ever exhausted. IPv6 was already standardised in 1998, but it was not deployed by most organisations for many years. The main reason for IPv6’s slow start was its incompatibility with IPv4, which requires a full infrastructure upgrade and transition techniques that allow IPv4 and IPv6 coexistence, as well as IPv6’s lack of attractive new features, other than the large address space, which makes the upgrade unattractive for first adopters. Since 2015 most of the RIRs, except AfriNIC, have run out of addresses. Yet, IPv6 is still not widely deployed in many countries.

Many of the previous studies on IPv6 were published in 2012 or earlier, but until 2012 the use of IPv6 has remained marginal. IPv6 deployment has only started to accelerate since the second half of 2012. After an accelerated deployment for a few years, it is timely to conduct another study on the deployment of IPv6. Our study focusses on Australia and China for a number of reasons.

First, both countries had low IPv6 deployment in early 2016, so the study will be very relevant to both countries. While brief macroscopic information of IPv6 deployment in Australia and China exists, detailed data about the state of IPv6-deployment and future deployment plans is unavailable. Second, by investigating Australia we can compare our results against Dell to measure how much the IPv6 deployment has accelerated in the last few years (and whether the progress matches observations from network measurement). Third, while Australia and China are similar with regards to low IPv6 deployment, they are very different economies. China is a large and still developing economy with a population much larger than the number of IPv4 addresses, whereas Australia is a small developed country with a much larger number of IPv4 addresses per capita than China. This has lead to different approaches for IPv6 adoption, i.e. while IPv6 was high on the agenda in China (and part of the 5 year plans), in Australia the reaction was more muted.

The aim of this study was to shed some light on the following questions with respect to organisations in Australia and China: 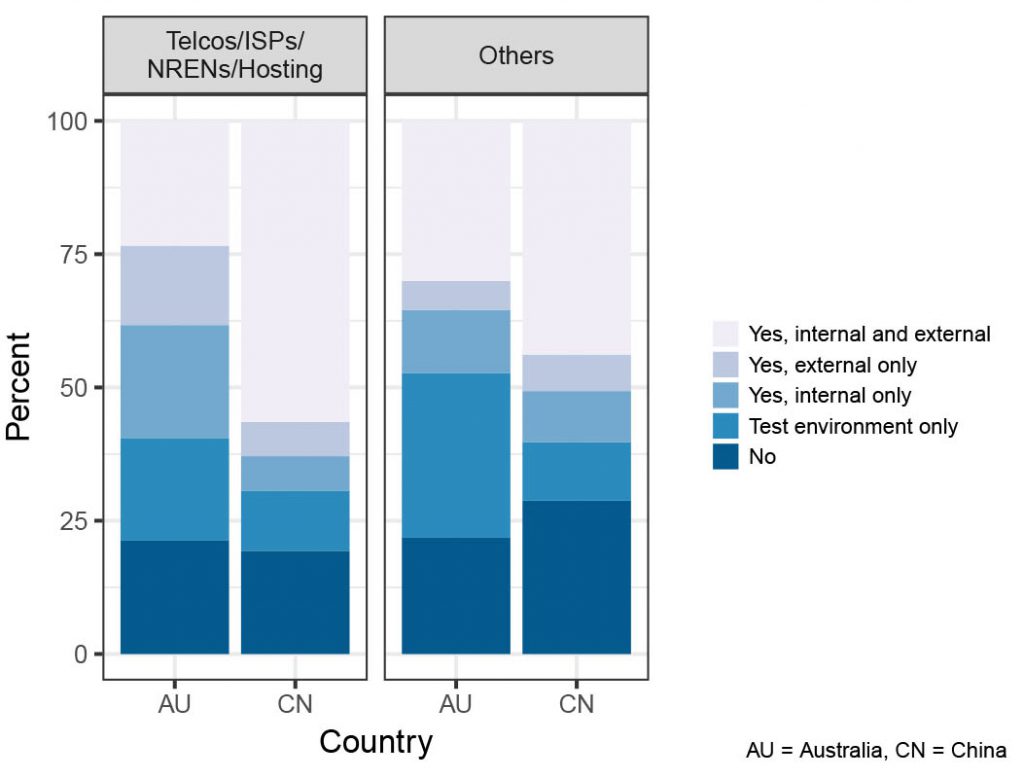